The personal is political. What does that mean?

Trump’s current attempt to exploit fear in order to convince people to vote for him is one manifestation of “the personal is political”. This tactic has been used by dictators the world over.

For example, behavioral science is being used to “market” political candidates and opinions. According to the New York Times, the 2016 Trump campaign used Facebook data to create “a behavioral model powerful enough to manipulate people’s activity and, potentially, sway elections.”

If your Facebook personality profile showed that you were fearful, you’d get a message about how dangerous immigrants were. In 2020 you’ll probably get a message that “you’ll never be safe” if the Democrats win the election.

As a result of this successful combination of behavioral psychology and marketing, our political system is not based on reasoned arguments. This form of manipulation appeals to knee-jerk reactions.

You can move beyond these emotional triggers by learning to notice your bodily felt sense of a situation.  You’ll learn how to “accompany” your emotions from a place of “Presence” so that you can be aware of what is going on inside without being overcome by it. Focusing puts you in the driver’s seat of your life.

An experiment in “the personal is political”

Here is a short experiment in Thinking at the Edge with “the personal is political”. It’s based on an exercise from Donata Schoeller, a leading scholar and teacher of Gendlin’s Philosophy of the Implicit. Would you like to play?
1. First, please choose one of the following 3 words:
“police”, “election”, or “hospital”.
2. Once you have chosen a word, notice what situation from your life “arises from” or “comes with” that word.
3. Check to see if the situation that came calls forth a bodily sensation
4. Describe the bodily sensation of that situation with words, metaphors, emotions, textures, colors, shapes, memories, gestures, sounds.
5. Now, take this description back to the original word and notice how it affects or re-informs the word you chose.
6. If it feels right to do so, reply below, or share your response in an email to me.

After this short form of Thinking at the Edge, can you sense the meaning of “the personal is political”?

Many of us are dismayed about the violent rhetoric in politics and on social media. We need ways to be able to communicate across social, cultural, economic and political divides. Nonviolent Communication and Focusing enhance each other and when practiced, are accessible tools for change.

“Don’t want too much,” the voices warned.

Want this fragile oasis of the galaxy to flourish.
Want fertility, want seasons, want this spectacular array of creatures,
this brilliant balance of need.

Want it. Want it all.
Desire. Welcome her raging power.
May her strength course through us.
Desire, she is life. Desire life.

Allow ourselves to desire life, to want this sweetness
so passionately, that we live for it.

Ellen Bass, “Live For It” 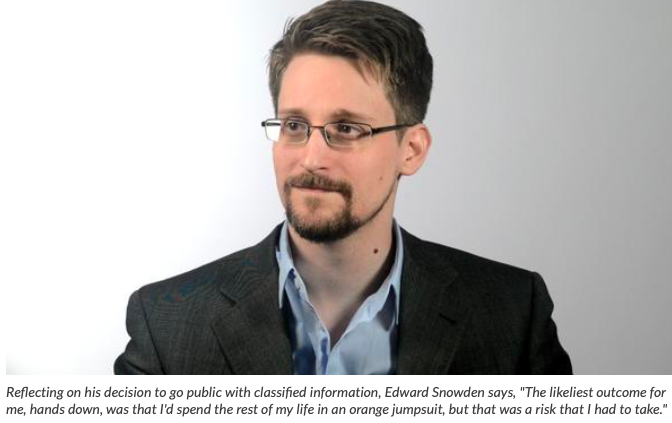 Citizenfour won an Oscar for best documentary of 2015

A felt sense feels right despite the uncertainty of the circumstances. This illustrated in the documentary Citizenfour, a quiet, thoughtful, inspiring film about the week in June 2013 when Edward Snowden turned over thousands of classified NSA documents to journalists Glenn Greenwald and Laura Poitras in a Hong Kong hotel room. Snowden was a contractor with the National Security Agency. He had become increasingly concerned about global surveillance programs run by the NSA with the cooperation of telecommunication companies. He wanted US citizens to know that their data was being turned over to the government, as it would be in China.

Snowden had tried to raise his ethical concerns through internal channels at the NSA but had been ignored. He knew that he had to set up his revelations very carefully. Instead of the more random Wikileaks style, Snowden chose to turn his information over to Greenwald and Poitras, principled journalists who had, themselves, been subjects of surveillance. He trusted that they would not sensationalize the issue. He hoped that his revelations would open the subject for public debate.

By hoping to alert Americans to their loss of freedom, he was setting himself up to lose his freedom completely

When they met for the first time in Snowden’s hotel room, Poitras asked if she could film their interaction. We witness their first uneasy meeting. Snowden deals quietly and poignantly with having left his partner of many years, his job, and his family without having revealed to them any of his plans. He has stepped out into an action space, not knowing what would happen next.

In the first part of the film, we get to know William Binney, a mathematician/cryptologist who devised a lot of the data-intercepting methods that are used today by the government. Binney had expected that his inventions would be used in a way consistent with the US constitution. However, he saw that after 9/11, data intercepting systems were used to track everyone, indiscriminately. He resigned on October 31, 2001 after 30 years with the NSA. The FBI interrogated Binney after he contributed to a 2005 New York Times exposé on warrentless eavesdropping. In July 2007, the FBI, raided his home. They confiscated his computer, discs and personal and business records. Citizenfour also documents congressional hearings and court cases in which NSA officials flatly deny or deflect surveillance charges. Snowden had a lot of examples of what can happen to people who protest NSA policies.

To see someone put his life on the line like the 29-year-old Snowden, is quite compelling. We follow him day by day until his escape to the office of the UN High Commission on Refugees and his eventual exile in Russia.

A cinematic example of felt sensing

I am interested in cultural examples of felt sensing. The slow, sensitive nature of this film shows Snowden listening to a felt sense. The felt sense can often be at odds with practicalities, but it leads to an inner sense of congruence and truth.

From minute 56 to 58 of the film, there is a moment that illustrates what a felt sense can look like. After the journalists have revealed his identity (but not his whereabouts) to the media, Snowden gets some worrisome news from his girlfriend about government efforts to find him. He stands up, walks to the window, and stares silently outside for awhile.  Then he turns and says “It’s an unusual feeling that’s kind of hard to describe or convey in words. Not knowing what’s going to happen the next day, the next hour, the next week, is scary….. but at the same time it’s liberating. The planning comes a lot easier because you don’t have that many variables to put in play. You can only act and then act again.”

Here are the elements of felt sensing that you can see in these two minutes from Citizenfour. Snowdene pauses and senses inside as he stares out the window in silence. He notices a feeling that is hard to put into words. Like many of the most dynamic felt senses, it is multifaceted and paradoxical in nature. On one hand, the uncertainty of his situation is scary. On the other, it’s liberating. He is no longer planning things in his head. He knows he must just act, then act again.

Felt sensing can never be done by computers

This is why I teach Focusing and Thinking at the Edge. Not all of us have Edward Snowden’s courage and commitment to act on our conscience in a public way as he did. And yet we have many felt senses every day. Paying attention to our felt sense can help us act with integrity in situations large and small. In Citizenfour, we can see the simplicity and the clear direction that happens when Snowden gives expression to his implicit knowing. The felt sense feels right, despite the uncertain circumstances.

As a species, we need to develop and trust this innately human felt sensing capacity. We all have it, and we can learn how to listen to it. Felt sensing can never be done by computers. It is not based on “the numbers” of probability. The felt sense gives us access to the whole of our situation, in all its implications, so that we can act as human beings.

Felt sensing helps us pay attention to what makes us human. Our humanity must always balance technology. Felt sensing reveals new and relevant truth, and when it does so, we feel free, liberated. Balancing our inner truth with our technological knowledge enables us to find new possibilities, far beyond probabilities that depend on what has gone before.

*Here’s a link to a recent interview with Snowden.